Stop Dreaming and Start Acting! 10 Easy Steps to Become an Actor in Thailand

Have you ever dreamed of becoming an actor in Thailand? Here is an easy guide on how to make this dream become reality!

1. Get Some Good Headshots / Portfolio Shots

Your face is going to sell you. To get your foot into the door of any production be it TVC, Film or TV is a good headshot of yourself. So if you want to become an actor in Thailand, your first step should be to get some good headshots of yourself.

A good headshot should show your natural self, best without any make up. Just the way you are, so film people can get an idea of what they can do with you.

Selfies just won’t do the trick.

What is a comp card? Very easy. It is a collection of at least 5 pictures in one image. You can create your comp card here:

3. Send Your Headshots / Portfolio To All Agents

Your second step in becoming an actor in Thailand is to send your profile to all agents. This may seem counter-intuitive at first. Why would you send your portfolio to all agents and not just one?

In Thailand the industry works different than in other countries. Each of the agents in Thailand has a special relationship to some production companies. So if you don’t send your profile to all agents you may loose out on some jobs simply because you’re not being presented for the job.

While there is a lot of gossip going on on the Facebook pages of the actors in Thailand, agents as well as some casting directors post jobs there. It is a good way of staying updated on what is going on.

There are several others that you can find if you look around a bit.

The first 3 steps should enable you to get at least some extra jobs.

Extra jobs enable you to get a glimpse at what it is like to work on set. You’re part of a crowd. You hardly get any attention, but it’s good to get some experience as to what it is like to work on a set. Most likely you’ll work long ours (usually a minimum of 12 hours) for a minimum wage (1500-2500 Baht). You probably sit around and wait for many hours. But that is part of what working on a set is like.

After you’ve done some extra jobs you’re ready to work yourself up the ladder. You go to some castings and if you’re lucky you’ll score a featured, support or even a main part. With each step your budget, exposure and the attention you get increases. Maybe you are super talented and lucky. Maybe you score your first main part right away.

All I’m saying is, be patient and hang on. When the time is right, you’ll get the part.

Once you scored some jobs you should start to invest in yourself. Improve yourself, your skills.

Ron is probably the most experienced stunt man in Thailand. He started his career back in the Netherlands working on a movie with Jackie Chan. Then moved to Hong Kong and finally settled down in Thailand. He offers private classes for those who are serious about their work.

Working on set, whether as extra or in another part, don’t be mistaken, it is a job. People are watching you and how you behave. If you are being asked to be somewhere at a certain time, be there on time.

Every time you are on set is a chance for you to show people that you are willing to work. People on set are watching and will remember the way you work. The industry is much smaller than you may initally think. Everybody knows everybody and people will talk about you and how you behave on set.

You want to create a repuation of a hard worker who is able to perform.

Although this is basically an addition to Number 6, I think it’s worth mentioning as separate point.

I’ve seen it happening many times. Once on set people start behaving their worst. All the things that momma told you not to do at home are suddenly displayed and laid out on set.

If you behave like an ass on set people will remember and people will talk about you. News will spread and you will see less jobs coming your way – unless your name is Christian Bale, of course.

In any industry it is good to keep track of what you’ve done. The film industry is not different. Here is an example of how your resume can look like: Acting Resume

Although it is much less important than in other countries it is a good idea to create an acting / stunt reel at some point of your career to show people what you are capable of. A reel should not be longer than 3 minutes (preferably less than that 2.30 is the standard) and remember less is more. Rather choose fewer scenes with more intense acting than trying to put all of your work into a short clip.

Here is a sample for an Acting Reel

So those are the first 9 steps to get into the Film Industry in Thailand.

Do you want to boost your chances in the market? Book a free 30 Minute Consultation with me now! Email me at: robin@masterclass-studio.com 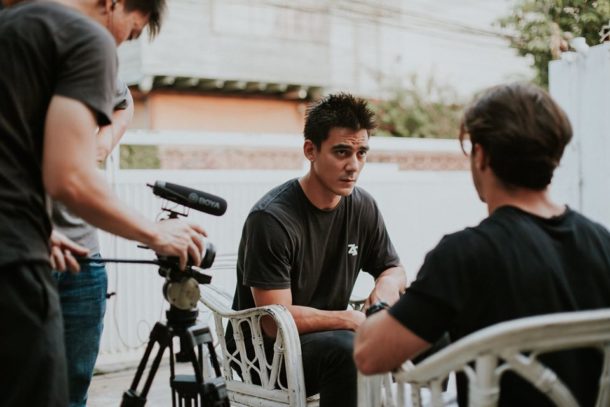