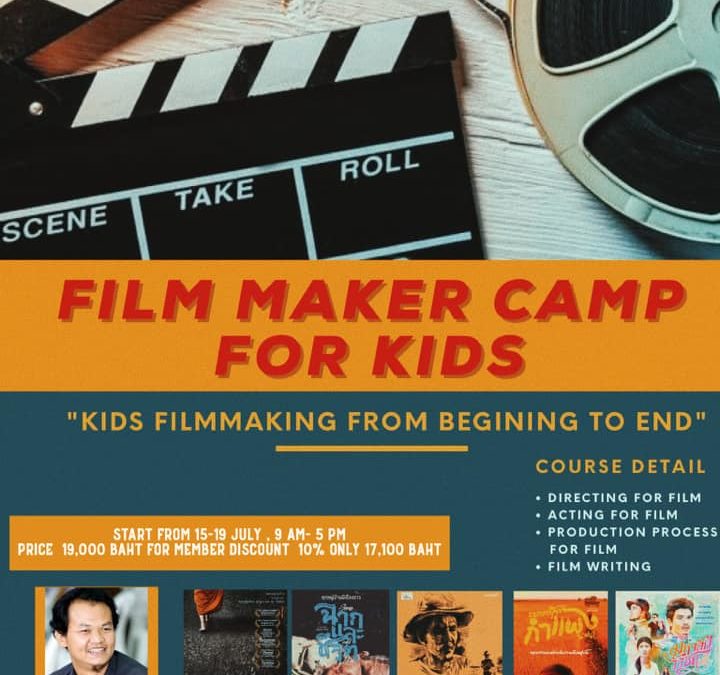 For kids that dream of experiencing all aspects of making a movie: Acting, Directing, Script Writing, Camera Operation and Editing.
This Film Making Camp is for kids that want to study the process of making a movie and acting for film.This Cooperation between MasterClass Studio and Fish Swims in Highwaters Film Studio of the Director Kru Sueb Boonsong Nakid. Kru Sueb is a filmdirector, actor, teacher and acting coach with a Master’s degree in Film Making.
He has directed theatre plays and movies for 10 years and taught acting and directing for more than 19 years. Kru Sueb has been an acting coach for 11 films including Tavipop Bangkrajun, Love you to the Sky and many more. Furthermore, he has produced and directed 10 movies, 7 of which entered the cinemas.The Film Making Camp for Kids includes:
– Acting for Film
– Directing Movies
– Screen Writing
– Setting up a production and editing
Over the course the students will make their own short film and take part in all aspects of the process be it acting, directing, editing. This camp focuses on learning by doing under supervision of an industry professional.

The price is only 19,000 Baht (50% downpayment on registration required)

For more information on how to sign up for the Film Making Camp, please contact:
FB Page : MasterClass Studio
Line ID : Jumroonjune
Call : 063-9965222